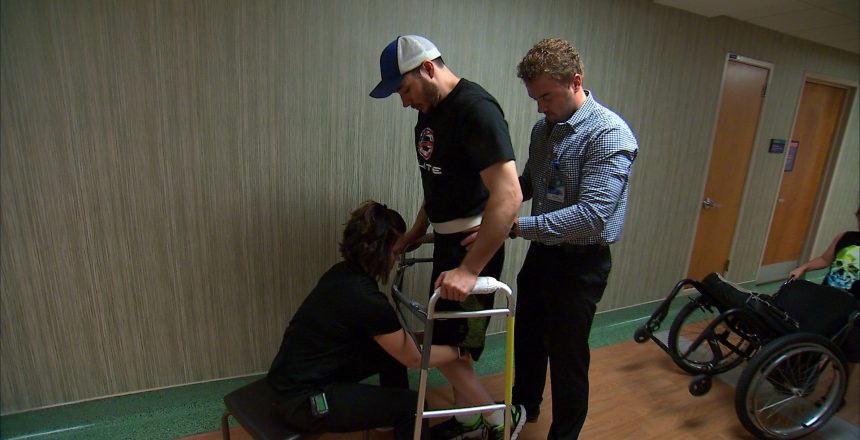 Kristopher Boesen’s life changed just before his 21 st birthday. Kristopher, who goes by Kris, was in a car on a wet road. The driver lost control of the vehicle when it fishtailed on the wet road, hit a tree, and then hit a telephone pole. Kris was left with a cervical spine injury and was thought to be permanently paralyzed from the neck down. Fortunately, stem cell therapy helped him regain the function of his arms.

In order to fully understand the extent of Kris’ injury, it is first important to understand how neuroanatomy works. The spinal cord contains all of the neural information between the brain and the rest of the body. It tells the body how to move, and takes feedback about temperature, pain, touch, position, and many other things. It serves as a highway for
communication. With any type of spinal cord injury, that highway is cut off. The further up the spinal cord, the more the brain is cut off from the rest of the body. Kris suffered a cervical spinal injury. This means that everything below his neck was cut off from his brain, resulting in paralysis. Some patients with cervical spinal injuries cannot breathe because the diaphragm, the muscle that moves the lungs, is paralyzed. The patient is often otherwise alert. These injuries do not have a current cure.

Stem cell therapy is what Kris received at Keck Medicine. It is based on newer technology. While the results are promising, the research is still in the beginning phases. Therefore, stem cell therapy is considered experimental. Stem cells are cells found in many tissues of the body that have the potential to become different types of cells. They can be
harvested from many different tissues in the body. The most common sites are blood, bone marrow, and umbilical cord tissue. The cells are then isolated and culture-expanded, meaning they are grown in the lab on a special medium that helps them grow and multiply. They are then injected into patients. This can be done intravenously into the bloodstream or intrathecally, into the spinal canal.

After his injury, Kris and his family were approached by Charles Liu, MD, PhD and director of the University of Southern California Neurorestoration Center. Dr. Liu was a part of Kris’ surgery team. He also happened to be working with The Rancho Los Amigos National Rehabilitation Center and Keck Medicine of USC, an organization that has an ongoing experimental method of injection stem cells into the spinal column. Dr. Liu explained to the
Keck Medicine of USC, “Typically, spinal cord injury patients undergo surgery that stabilizes the spine but generally does very little to restore motor or sensory function. With this study, we are testing a procedure that may improve neurological function, which could mean the difference between being permanently paralyzed and being able to use one’s arms and hands. Restoring that level of function could significantly improve the daily lives of patients with severe spinal injuries.”

In order to qualify for the study, Kris had to meet certain criteria. He had to be between the age of 18 and 69, have a condition that was stable enough to be injected with AST-OPC1, and to fall within the window of 14 to 30 days following his injury. He then had to be weaned from the ventilator in order to be able to speak and voice his consent. He signed paperwork, began assessments, scans, and other tests. He was then injected with 10 million AST-OPC1 stem cells directly into his cervical spine. After six weeks, he was discharged to continue his rehabilitation. His progress was reviewed at 7 days, 3- days, 6- days, and 90 days post-injection. He will have to follow up 180 days, 270 days, and one year after injection.

The study itself is part of a Phase 1/2a clinical trial to evaluate escalating doses of AST-OPC1 cells. These cells are derived from embryonic stem cells and converted into oligodendrocyte progenitor cells (OPCs), a precursor of a cell found in the brain and spinal cord. The theory behind this study is that the OPCs stimulate vascularization and induce healing to the injured axons in the spinal cord.

Two weeks after surgery, Kris showed signs of improvement. Just three months later, he was able to use his arms and hands to feed himself, use his phone, write, operate his wheelchair, and hug his family and friends. He also had better sensation in his upper body. This unexpected improvement has given him hope to be more independent. “All I’ve wanted from the beginning was a fighting chance,” said Kris to Keck Medicine. Kris is still hopeful that he may regain even more function. “[If] there’s a chance for me to walk again, then heck yeah! I want to do anything possible to do that.”

While stem cell therapy is still in the beginning stages, there are more and more stories like Kris’ giving the medical community hope for a better, more definitive treatment for these devastating injuries. At the Stem Cells Transplant Institute, we have developed state-of-the-art treatment protocols for spinal cord injury patients. If you are interested in learning more about how you can use this technology for your own health goals, please contact our institute today.