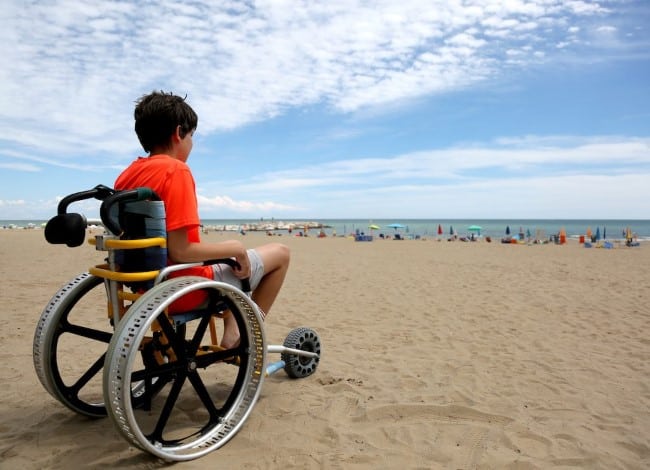 Amyotrophic Lateral Sclerosis (ALS), is a neurodegenerative condition that involves the breakdown of motor neurons in the spinal cord and the brain. Patients with ALS may experience weakness in their limbs followed by a quick and progressive paralysis that leads to total paralysis, respiratory failure and death.

The Stem Cells Transplant Institute in Costa Rica, recommends the use of umbilical cord stem cells for the treatment of ALS.

Treatment at the Stem Cells Transplant Institute could help improve the symptoms of amyotrophic lateral sclerosis:

ALS is a progressive neuromuscular disease that damages primarily the nerve cells in the brain and spinal cord, responsible to controlling voluntary muscle movement like chewing, walking and talking.  Damage to the barrier or protective wall between the central nervous system and the blood circulatory system allows harmful substances including immune mediated cells and inflammatory cells to enter both the brain and the spinal cord. 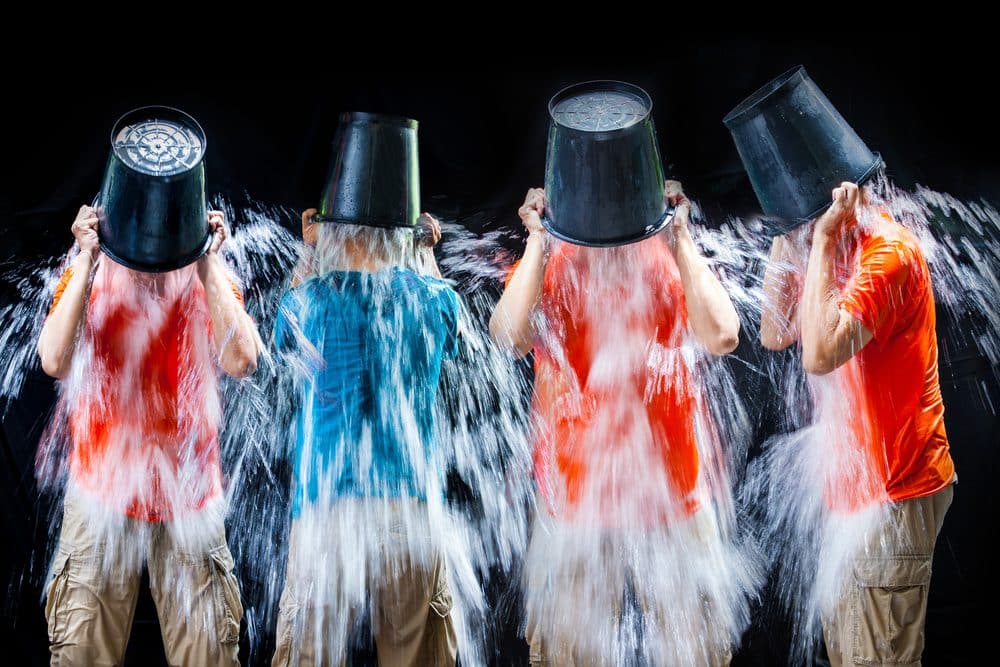 Who is at Risk of Developing ALS?

In 2016 the Centers for Disease Control and Prevention estimated that between 14,000 – 15,000 Americans have ALS.  ALS usually strikes people between the ages of 40 and 70, and for unknown reasons, military veterans are approximately twice as likely as the general population to be diagnosed with the disease.

Age; Typically striking people between the ages of 40 and 70.

Gender; Men are at slightly higher risk of developing ALS

Ethnicity; Caucasians and non-Hispanics are at highest risk

Military veterans; Twice as likely when compared to the general population to develop ALS

Genetics; Approximately 5-10 percent of cases are inherited by one parent carrying the genetic mutation

How can stem cell therapy improve the symptoms of ALS?

A cure for ALS is not available at this time, and the disease typically leads to death within 3–5 years after diagnosis, primarily due to respiratory failure.

Stem cell therapy is a promising approach for the treatment of neurodegenerative disorders such as ALS. Mesenchymal stem cells (MSCs) specifically, seem to be the most suitable type of stem cells due to their demonstrated beneficial effects in many different experimental models, their easy access, and the lack of ethical issues associated with other types of stem cells.

The beneficial effects of mesenchymal stem cells are due to multiple factors. The beneficial effects are due in part to the paracrine effect that results in the release of different growth factors, cytokines, free nucleic acids, lipids and extracellular vesicles. These secreted biomolecules promote tissue repair, modulate the immune system, have an anti-inflammatory effect and provide antiapoptotic activities.1

Human umbilical cord mesenchymal stem cells (hUC-MSCs) can promote the release of acetylcholine, promote neurogenesis and synaptic formation and can reduce oxidative stress and cell death. Research is showing hUC-MSCs to be a better alternative to allogeneic stem cells because of their hypo-immunogenicity, superior tropism, high differentiation potential and paracrine activity.2,3

Neural stem cells transplanted at sites of nerve injury are thought to promote functional recovery by producing trophic factors that induce survival and regeneration of host neurons. Intravenously administered mesenchymal stem cells are also capable of crossing the blood-brain barrier and effectively migrating to regions of neural injury, without inducing tumor growth or an immune response.4

What are scientists researching?

According ClinicalTrials.gov (https://clinicaltrials.gov) on August 22, 2019, there are 9 trials evaluating the safety and efficacy of cell based therapy for the treatment of Amyotrophic Lateral Sclerosis. 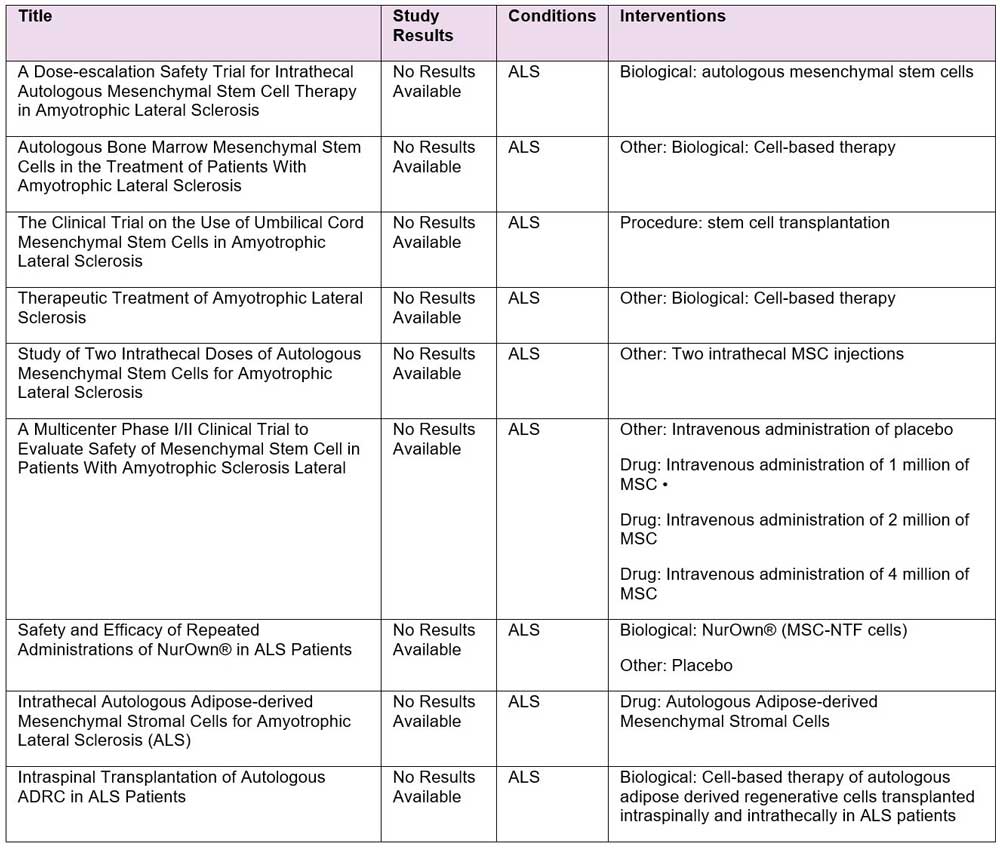 What is the recommended treatment protocol for ALS at the Stem Cells Transplant Institute?

The Stem Cells Transplant Institute recommends the use of hUC-MSCs for the treatment of ALS.

Each day you will receive the following:

Some studies have found autologous MSCs from patients diagnosed with ALS have reduced properties when compared to MSCs taken from healthy donors. Stem cells from patients with ALS showed reduced expression of several trophic factors and a reduced migration capacity.5-7

What are the advantages of human umbilical cord mesenchymal stem cells?

What are the challenges?

ALS is a group of neuromuscular diseases that destroys many different types of neurons in the brain and spine.

Successful treatment requires all the stem cells to travels to the brain and spine and differentiate into different types of neurons and other cells correctly.

At this time stem cell therapy does not stop the underlying cause of ALS and patients may need more than one treatment due to a declining effect over time. 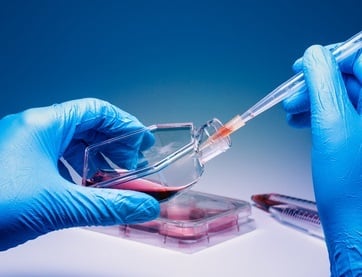 How are the stem cells collected?

The umbilical cord stem cells from are collected after informed consent has been given by the parent, or parents, and only after the delivery of the baby.

Once collected, the cord blood is then screened for disease.

How are the stem cells administered?

The stem cells are administered by intrathecal (spinal) injection, intramuscular and intravenous injection 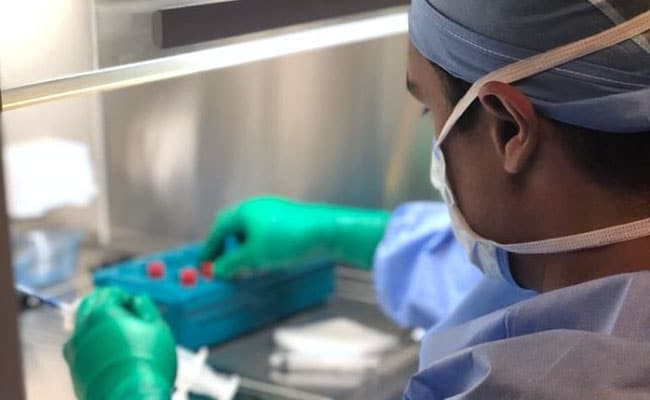 Costa Rica has one of the best healthcare systems in world and is ranked among the highest for medical tourism.

Using the most advanced technologies, the team of experts at The Stem Cells Transplant Institute believe in the potential of stem cell therapy for the treatment of autoimmune diseases.

We are committed to providing personalized service and the highest quality of care to every patient.