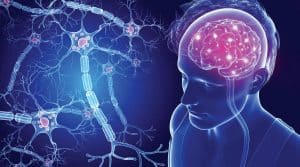 The body is filled with billions of nerves. Some of them travel from the brain, to muscles and skin, and then back again to the brain. Some of the nerves are covered in a myelin sheath. Myelin is a mixture of proteins and other compounds. It forms a kind of insulation around the nerve. This causes the information conducted through the nerves to travel faster. Without a myelin sheath, the information travels very slowly, or not at all. This can result in changes in vision, difficulty moving, weakness, or numbness.

What is Multiple Sclerosis?

Multiple Sclerosis, also known as MS, is an immune-mediated inflammatory disease. The exact cause is not confirmed, but the prevailing theory is that one’s immune cells become activated for an unknown reason, begin attacking the myelin sheath, and eventually form scar tissue in the nervous system. This occurs most commonly in the brain and the spinal cord.

What are the symptoms of MS?

The most common symptoms of MS include impaired vision, color blindness, shooting electric-like pain, numbness in different limbs, and abnormal reflexes. There are many other symptoms. Every patient presents differently. In some forms of MS, some of these symptoms may appear for months or weeks and then resolve.

How do you diagnose MS?

The most common way to diagnose MS is through Magnetic Resonance Imaging, otherwise known as an MRI. This is a type of scan that provides the most detailed image of a brain possible. A radiologist (a doctor that specializes in reading imaging) can look for certain signs on the MRI.

Sometimes, doctors are able to diagnose someone with MS based on a lumbar puncture. A lumbar puncture is a procedure where a doctor puts a needle into the space right below the spinal cord. This space is filled with cerebrospinal fluid, the fluid that surrounds the brain and spinal cord. The doctor can then run a test on this fluid to see if it has certain markers consistent with MS.

What is the prognosis of MS?

What is the current treatment of MS?

There is some research evidence that suggests that stem cells can help slow the progress and heal some of the damage to nerves caused by MS. The National MS Society convened a Task Force in 2005 to direct research on stem cells in the treatment of MS. Since then, there have been promising trials that indicate a role of stem cells in MS treatment. One specific line of stem cells that shows promise is called culture-expanded mesenchymal stem cells.

What are culture-expanded mesenchymal stem cells?

Stem cells are cells in the body that can be developed into many different types of tissues. Mesenchymal stem cells (MSCs) can be isolated from adult bone marrow, umbilical cords, fat, and many other tissues. They can then be culture-expanded, meaning scientists can grow more MSCs in the lab. They put them on a special growing medium, called a culture. The cells then multiply.

How would the procedure work?

What does the literature say?

This study only applied to people with 2 of the 3 subtypes of MS: relapsing remitting and secondary progressive. The main concern of the study was to see if it was safe to harvest, grow, and inject MSCs into patients. Overall, the patients tolerated the procedure well with minimal consequences. In theory, it has been shown that MSCs can change how the immune system responds to myelin, protects tissue, and repairs damage. However, these other studies are in the very early stages of research. Further research is needed to show how these affect patients with MS in the long term.

MS is a chronic, immune-mediated inflammatory disease that causes changes in vision, weakness, numbness, and a variety of other symptoms. Every patient has a different experience with MS. The prognosis varies. Current treatment suppresses the immune system. This can slow the progress of the disease, but currently there is no way to repair the damage already done. The current treatment also causes undesirable side effects. Current research is aimed at studying mesenchymal stem cells. MSCs have been shown in theory to protect tissue and repair damage. Recent studies of MSC transplants have shown that the procedure is safe and patients tolerate it well. More studies are needed to show how patients with MS respond in the long term to MSCs, and whether it substantially changes their prognosis.

What can you do now?

Everyone with MS has a different course, and different treatments may suit different people better. Stem cell use for MS is an emerging field. We believe in providing safe and scientifically-directed care with stem cells harvested from umbilical cord tissue.

At the Stem Cells Transplant Institute, we have developed state-of-the-art treatment protocols for Multiple Sclerosis patients in culture-expanded cells. If you are interested in learning more about how you can use this technology for your own health goals, please contact our institute today.